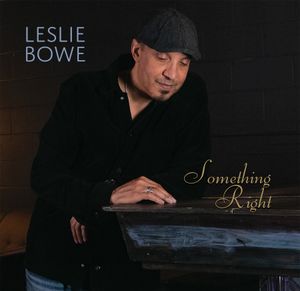 AVAILABLE NOW ON ALL STREAMING PLATFORMS BELOW:

Leslie Bowe is a singer, songwriter and musician following his dreams in Nashville, TN. Leslie is originally from Pittsburgh, PA and has been living in Nashville, TN pursuing a professional songwriting career for the past four years. He moved to Nashville to mainly write for other artists, but his love for writing and recording music for himself soon refocused that musical journey. Once an artist, always an artist- and so it was for Leslie. As a songwriter, he has won multiple awards over the years that include the current 2022 nomination and 2020 winner for the Nashville Songwriters Association International's (NSAI) prestigious member Evaluator Song of the Year award.

As an artist, Leslie Bowe has released 4 independent CDs: "Wings of your Dreams", "Through My Eyes", "Gypsy", and the "Color of Sound". And, over the many years he has opened or shared the stage with such artists as Ben Harper and Patty Griffin. His latest EP, "Something Right", was recorded organically at friend and producer Peter "Ren" Renfree's Sound Catcher Studios in Nashville. The songs were recorded with no click, Piano, B3, Acoustic upright bass driven reminiscent to the style of Amos Lee/Norah Jones/Jason Isbell, and geared to the Singer-Songwriter, Acoustic, Soul, and Americana-Roots audience. He wanted to get back to recording music that lived and breathed on its own, driven by the musical creators in the room like they did in recording sessions of the past. His songs and sound follow that same retro vibe aimed to deliver a simple but honest message that allows the listener to feel.

"Something Right" is a collection of songs carefully placed to take the listener on a musical journey of what the life cycle of love sometimes looks like: New Love to Losing Love, then Learning and Discovery, to finally Moving On. His first song release, "A Little Kindness", marks the beginning of Leslie's new musical journey. His release will be supported by live spots, local/national touring & festivals.